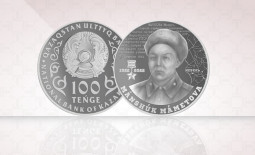 On November 4, 2022, the National Bank of Kazakhstan (hereinafter referred to as the ‘NBK’) issues into circulation MÁNSHÚK MÁMETOVA. 100 JYL collectors’ coins from the Outstanding Events and People coin series.

Information about a sale date of the coins will be additionally posted on the official website of the NBK.

The coin was issued to commemorate the 100th anniversary of the Hero of the Soviet Union Manshuk Mametova.

In the central part of its front side (obverse) the coin depicts the Coat of arms of the Republic of Kazakhstan, to the left and right of it, there are elements of the national ornament. Along the circumference it has inscriptions QAZAQSTAN ULTTYQ BANKI • NATIONAL BANK OF KAZAKHSTAN. At the bottom, it contains the inscription 100 TEŃGE, indicating a face value of the coin.

In the central part of its reverse, the coin depicts a sculptural portrait of Manshuk, to the left of it there is a gold star of the Hero of the USSR, as well as the inscriptions ‘1922’ and ‘2022’, indicating the birth year and the anniversary date. To the right, there is a stylized image of a map and the inscription: ‘НЕВЕЛЬ’ - the town where Manshuk Mametova died performing her feat. In the upper part of the coin, there is a stylized text of a certificate of recommendation for the highest state award – ‘Hero of the Soviet Union.’

Collectors’ coins were produced at the Kazakhstan Mint.