The base rate remains unchanged at 16.75% 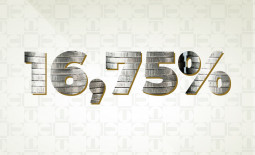 The Monetary Policy Committee of the National Bank of Kazakhstan has decided to set the base rate at 16.75% per annum with a corridor of +/- 1 p.p.

The decision was made in the context of compliance of actual inflation with the forecasts of the National Bank. The dynamics of internal and external inflation processes, as well as the trajectory of economic growth are formed in accordance with the baseline scenario of the forecast of the National Bank. Monthly inflation gradually slows down, at the same time exceeding its average annual values. The balance of inflation risks remains biased in favor of pro-inflation risks with a high stable part of inflation and accelerated inflation expectations. The negative impact of supply chain restructuring on the economy continues. Remaining risks require keeping the base rate at current levels for an extended period of time.

Inflation is formed in accordance with the expectations of the National Bank. Monthly inflation has been slowing for the third month in a row, falling to 1.2% in December 2022 (from 1.8% in September 2022). However, despite the decline, it is still high, significantly exceeding the annual average (the average December rate over the last 5 years was 0.7%).

At the end of 2022, the annual inflation rate amounted to 20.3%, falling within the forecasted range of 20-21%. As part of the annual inflation rate, the highest growth continues to be demonstrated by the prices of food and non-food products. Inflation of paid services remained unchanged, with a decrease in the cost of rent for improved housing and suppressed growth in prices for regulated services. At the same time, the persistent part of inflation remains high, indicating the persistence of a pro-inflationary environment.

External prices are generally formed according to the conditions of the baseline scenario. The external inflationary background is weakening, in line with the rhetoric of the previous decision. With widespread tightening of monetary conditions, the beginning of slowdown of inflation processes in many countries, including in the countries - trading partners is noted. Together with expected smooth decrease of world prices for food it will have downward effect on inflation in Kazakhstan. Oil prices are formed slightly lower than the level of $90 per barrel in the baseline scenario on average in 2023.

The trajectory of economic growth is formed close to the upper limit of the estimates of the National Bank. According to a preliminary estimate of the Bureau of National Statistics of the Agency for Strategic Planning and Reforms of the Republic of Kazakhstan in January-December 2022, the GDP growth rate was 3.1%. Consumer imports growth, stable dynamics of retail turnover and a continued increase in consumer lending are observed.

Inflationary risks persist. The restructuring of the trade structure with high and unstable inflation expectations, continued high food inflation, postponed inflation for regulated goods and services after the period of administrative regulation, and high uncertainty about the ongoing military conflict in Ukraine are key risks for inflation. At the same time, the situation with external demand amid risks of recession in the world, as well as logistical conditions introduce significant uncertainty about the trajectory of oil prices and economic growth.

Given that the actual inflation rate is formed in accordance with the baseline scenario and taking into account the current balance of risks, the National Bank adheres to the previous statement about the proximity of the end of the base rate hike cycle. The potential for further increase in the base rate is limited. At the same time, given the remaining pro-inflationary risks and in order to avoid the anchoring of inflation expectations at high levels, it is necessary to maintain the base rate at current values for an extended period of time

The next base rate decision will include an updated forecast from the February 2023 round.

The next scheduled decision of the Monetary Policy Committee of the National Bank of Kazakhstan on the base rate will be announced on February 24, 2023 at 12:00 p.m. Astana time.