The base rate was raised to 16% 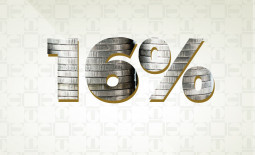 The decision adjusts the trajectory of the rate, maintaining the direction and pace set by previous decisions and communications. The rate hike is due to a combination of factors pointing to rising inflationary pressures. The surpass of inflation over forecasts in September became quite significant. The key factors behind the decision were high inflation expectations, steady demand, fiscal impulse, rising production costs due to a shift to a more sustainable supply chain, the continued pass-through of external inflation, including the continued strength of the Russian ruble. Increased inflationary expectations are putting pressure on prices and consumer behavior. All of this requires tighter monetary conditions to keep inflation under control in 2023.

The effect of an increase in the base rate will be seen with a lag of 1-2 years, supporting the savings activity of economic entities and contributing to the balance on the domestic foreign exchange market.

In September 2022, annual inflation was 17.7%, significantly deviating from the projected trajectory. A steady rise in prices across all components of inflation has been observed. After a slowdown in July, the seasonally adjusted consumer price growth accelerated significantly in recent months. The annulated rate in September was 26.8% (17.7% in July 2022). Core inflation is forming at elevated levels, reaching 19.7% in annual terms. This indicates the risk of formation of a prolonged high inflationary background in the economy.

Stronger fiscal stimulus is a significant source of pro-inflationary pressure in the economy. This is expressed through the impact of fiscal policy on the growth of money supply (M3), which since the beginning of the year grew by 7.9% or 2.4 trillion tenge. In 2022, the state budget expenditures are formed significantly higher than last year. The growth for 9 months of 2022 amounted to 18.9% in annual terms. The overwhelming growth of budget expenditures in the current year requires a compensating reaction from the monetary policy of the National Bank.

The dynamics of economic activity is formed in accordance with the forecasts of the National Bank. In January-September 2022 GDP growth was 2.8%. The slowdown in business activity is mainly due to weak dynamics in the mining industry. Non-oil sectors make a positive contribution to GDP dynamics: manufacturing, construction, trade, information and communication, transport and agriculture.

Consumer demand maintains a positive trend amid rising inflation. The volume of nominal retail turnover in the first nine months of 2022 increased by 15.7% compared to the previous year. Additional pro-inflationary pressure on the demand side is created by the growth of consumer lending to individuals (by 21.4% in January-September 2022 compared with the same period of 2021).

External factors are characterized by a high degree of uncertainty.

Prices on global food markets continue to decline, as evidenced by the FAO index. In September 2022, the index decreased by 1.1% (in annual terms - an increase of 5.5%). At the same time, an increase in wheat prices is observed due to the risks of grain export from the Ukrainian Black Sea ports and weather conditions in Argentina and the United States.

Consumer inflation continues to accelerate in many countries. In the EU, inflation was 10.9% in September 2022. In Germany in particular, inflation accelerated from 8.8% to 10.9%. In the U.S., inflation has remained almost unchanged in spite of more aggressive U.S. Federal Reserve policy. In this environment, the monetary policy of most central banks continues to tighten, prioritizing the inflation target. For example, the U.S. Federal Reserve interest rate has been consistently raised from 0.25% to 3.25% since the beginning of this year.

The outlook for further development of the global economy has been worsened again. The IMF forecasts for global economic growth in 2022 remained unchanged at 3.2%. At the same time, estimates for 2023 were lowered from 2.9% to 2.7%. High geopolitical risks, increased inflationary pressure and decline in economic activity in China remain the main constraints to global economic growth.

The global oil market is characterized by multidirectional factors affecting prices. In the last month Brent oil prices have been fluctuating at the level of $82–96 per barrel. Prices were declining against worsening of demand forecasts, as well as growth of reserves in the USA. Supply disruptions from Russia and some countries of the Middle East supported the growth in prices. The prices were also supported by reduction of the total production quota of OPEC+ by 2m barrels per day starting from November 2022. The EIA predicts the Brent price will average $93 per barrel in Q4 2022 and $95 per barrel in 2023.

Important conditions for subsequent decisions will be the alignment of actual inflation with the forecasted trajectory, the dynamics of inflationary expectations of economic entities, as well as the balance of the above-mentioned risks in the external and internal environment. Taking into account the current situation, the potential for an increase in the base rate at the next meetings remains, and the National Bank intends to continue tightening monetary conditions, guided by the state of pro-inflation risks.

The next scheduled decision of the Monetary Policy Committee of the National Bank of Kazakhstan on the base rate will be announced on December 5, 2022 at 14:00 Astana time.