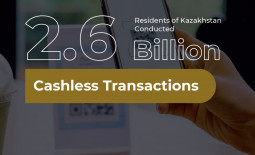 During six months of 2021, residents of Kazakhstan conducted 2.6 billion cashless transactions. This is a 2.5-fold increase year-on-year.

Gradual increase in the number of non-cash transactions has been reported since the beginning of the year. In particular, 508 million transactions were carried out in June, which is 1.5 times more than in January. Meanwhile, volume of cashless payments and transfers of the public for six months of 2021 exceeded 29 trillion KZT. This is 2.3 times higher than the figures for the same period in 2020.

Internet and mobile banking remains the most widely used this year. They account for 2/3 of all the cashless payments and money transfers and 83% of their volume. Detailed information is available for the media representatives by request:
8 (7172) 77–52–10
e-mail: press@nationalbank.kz
www.nationalbank.kz